Cats are incredibly cute pets, and their cuteness shows in numerous ways.

You might have realized that your feline friend loves to sleep in various positions. And in most positions, you’ll find your furry, little companion covering its face while sleeping, using either its paws or its tail.

When it comes to animal behavior, there are only two possible explanations; it’s either inherited or acquired. So, why do cats cover their faces when sleeping?

Most cats hide their faces while they sleep to keep their noses and bodies warm. When a cat draws its paws or tails around its face, it usually curls up into a ball shape. It’s this round shape that enables the cat to retain maximum heat, thereby having a comfortable and peaceful sleep.

But while this is the main reason why cats cover their faces while sleeping, there are many other possible explanations, as this post shall highlight later on.

How Do Cats Sleep?

Like most members of the cat family, the domestic cat loves to sleep. Cats are known to nap for about 15 hours a day, with others able to snooze up to 20 hours a day.

Generally, gray, cold, or drizzly conditions attract longer sleeping hours. Cats will only have their sleep cycles interrupted by other equally-important activities, such as feeding, drinking, playing, prowling, and emptying their bowels.

Cats are crepuscular animals, meaning they tend to be more active between dusk and dawn. Much as they’re natural predators, domestic cats also have numerous threats to worry about at night, thanks to their relatively smaller size. These range from snakes to leopards, wild dogs, coyotes, wolves, etc., depending on where you live. 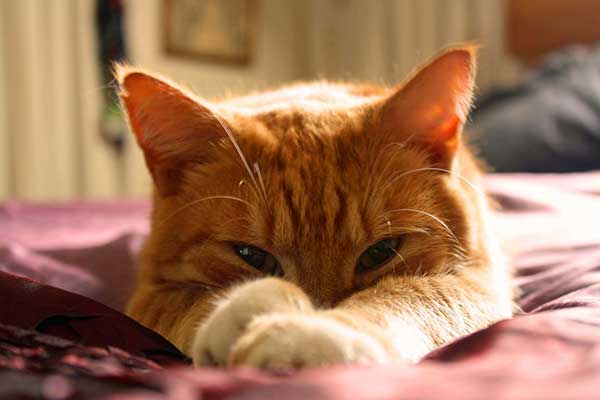 Therefore, it’s their instinct to stay alert at night and ward off possible threats while still chasing after all kinds of prey that come into sight.

Since the day presents minimal threats to their lives, cats prefer to snooze during the day. Also, sleeping during the day enables felines to build up the energy reserves that they can then use to hunt, fight off predators, or play during the night.

Unlike humans who sleep one long block of hours, cats sleep in short naps, occasionally getting awakened by sounds and smells in their napping area. Their acute senses of smell and hearing enable them to pick up the faintest sounds, including that of a mouse moving in the walls or attic.

So, even while a cat may appear so soundly asleep, they’re still alert and agile enough to spring into action when it calls for it.

But much as felines sleep at different times compared to their human owners, they also experience similar sleep stages as us. When a cat drifts into sleep, it normally slips into slow-wave sleep before moving onto the REM sleep. It’s at the REM stage that cats may dream, as is manifested by twitching of their paws, tails, or whiskers. It’s also important to remember that not all cats curl up with their paws or tails hiding their faces while they sleep. Others prefer to sleep sitting up.

Also, cats tend to develop such a strong bond with their owners that they may sacrifice their natural circadian rhythm to adjust to their owner’s schedules. That explains why over time, you’ll realize that your cute little friend now begins to sleep at night, just as you do. And while they’re at it, they’ll try to cuddle next to you, choosing to sleep near your pillow and snore the night away.

ALSO READ: Why Do Cats Sleep at the Foot of the Bed?

Why Do Cats Cover Their Faces While Sleeping?

We’ve already highlighted that the main reason your feline friend covers its face while asleep is so that it can retain as much heat as possible.

Cats understand that having a peaceful sleep has a lot to do with the amount of energy it preserves. Besides, a cat may be awakened from its sleep by a threat. And in order to successfully fend off such dangers, the cat will need to retain as much energy as it can while it’s asleep.

Curling up into a small ball reduces the cat’s surface area, making it retain maximum heat. 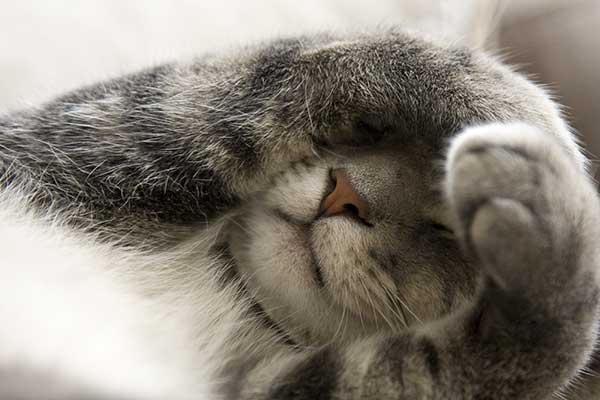 The following are some more reasons why cats cover their faces while sleeping.

We all have our different sleeping positions.

So, when your feline companion uses its paws to hide its face while it’s sleeping, it might as well mean that’s the sleeping position that the cat finds most comfortable.

As we mentioned earlier, cats are natural predators but are also oftentimes vulnerable prey. And they’re abundantly aware of that fact, which is why you won’t catch your furball with its guard down.

Cats are willing to pull all the stops to ensure they protect their safety. And sleeping with their paws or tails covering their faces is one of the ways the cat tries to safeguard its security. Remember, the face is the most vulnerable area in a cat’s body, and the cat cannot afford a sudden attack that rips its face apart.

Besides hiding their face using their paws or tails, some cats derive their sense of security from completely burying their heads in a laundry basket or under a blanket. And in most cases, the cat will also choose a vantage point for its sleeping area. This can either be on a high spot or an area where the entry and exit points are in full view.

ALSO READ: Why Does My Cat Watch Me Shower? (5 Reasons)

Light is a major obstacle to having a sound and peaceful sleep.

When your cat sleeps during the day, you’ll realize that it chooses a fairly dark spot to have its nap. If it prefers to sleep at night, the cat will likewise identify a dark room. 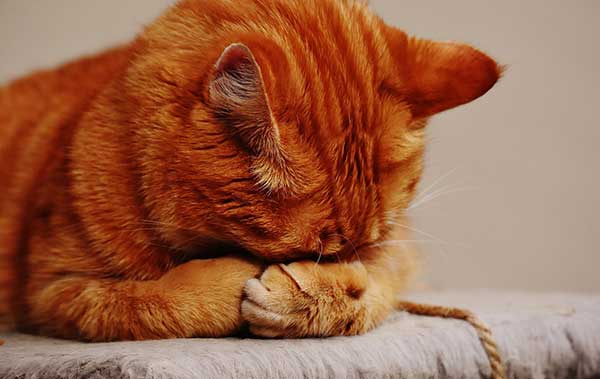 But what happens if the light is all over the place and your feline friend cannot escape its glare? Well, the cat will simply cover its face using its paws or tails.

Light and noise are both major impediments to sleep. So, the same way your cat would cover its eyes to block out light is the very way it will try to keep ambient noise away.

You’ve probably heard it mentioned that soft noise is instrumental for productive sleep cycles in humans. However, it isn’t clear if the same holds true for cats, considering their heightened sense of hearing.

Even the faintest sound is enough to raise a cat’s curiosity. But when the ambient noise is too much and there’s nothing the cat can do about it, it will wrap its paws over its face to try and mask the sound.

While they sleep two-thirds of the time, they spend the other one-third playing, prowling, and grooming themselves. All these get your feline friend completely worn out.

As the cat is grooming, it may doze off due to sheer exhaustion. In such cases, the cat naturally finds its paws over its face, and since it’s too tired to move it back down, the paw remains there. What appears like a deliberate move by the cat to cover its face with the paw is actually a grooming session ended midway.

Unusual Places a Cat May Sleep

A cat can choose to sleep in any position and in any place around the house.

However, the preferred spot will likely be an area that offers comfort, security, and one that’s away from the prying eyes of all other members of the household. But one of the most interesting places cats choose as their sleeping areas is on their owner’s bed. The following are some of the reasons most cats prefer to sleep on their owner’s bed;

It’s also worth noting that cats are creatures of habit. Seeing you retire to bed every night will get the cat curious and gradually mimic the behavior. According to the cat, sleeping on its owner’s bed is another routine that every other member of the household must observe.

Some pet parents love to cuddle with their feline companions on their beds while others are averse to the idea. However, there are pros and cons of allowing your cat to sleep with you. First, sleeping with a cat in the same bed helps cement the bond between the cat and its owner. Also, the cat may offer a sense of security from dangerous nocturnal animals, such as serpents, spiders, etc.

The heat that exudes from the cat’s and the owner’s body while cuddling together will help create a cozier sleeping environment. Lastly, proximity to cats may help reduce stress.

On the flip side, cats fidget a lot, which could repeatedly interrupt their owner’s sleep. And since cats are intrinsically crepuscular, the constant movements in your bedroom will also interfere with your sleep.

Remember that cats are attention-seeking animals, and it may begin to purr or meow at night to get their owner’s attention. Last but not least, sleeping with your cat might have you crush your little furball as you toss and turn on the bed. Most cats are aware of this and will choose a safer spot near the pillow.

Like most pet parents, you might have always wondered – why do cats cover their face with their paws when they sleep? Well, we hope the numerous reasons highlighted in this post help settle the question.

One thought on “Why Do Cats Cover Their Face When They Sleep? (5 Reasons)” 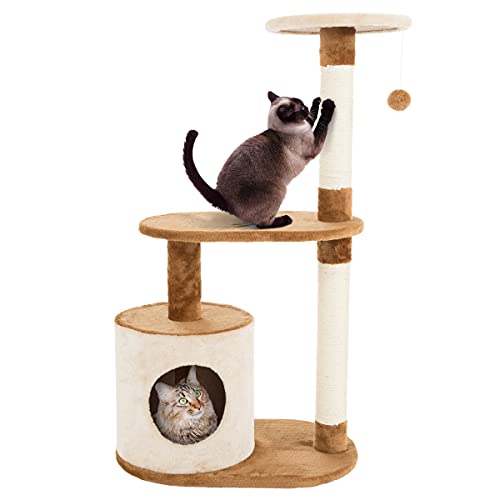